The below video was generated entirely within the browser with pdx.tools from my latest EU4 run where I took Naples and achieved Mare Nostrum. Check out the save within pdx.tools.

You too can create a timelapse of your save by clicking on the globe (🌐) after loading a save on pdx.tools. There will be a video camera (🎥) to kick off the recording. Here are some instruction screenshots for those who are more visual learners: 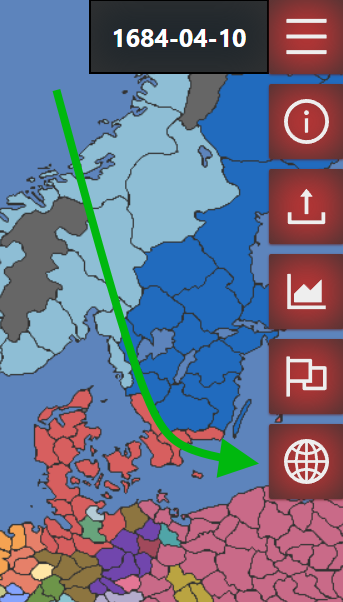 Then the video camera

There's tons of options. We can capture the entire world in a recording (feel free to maximize the video to get a better view).

There's a lot to unpack, so strap in.

This isn't the first tool to create a timelapse map of an EU4 save. Some prior art:

I may be biased but I believe our timelapse tool is the best:

And the best feature is that you can provide feedback!

Feedback is important as it helps us know where we should focus our time and if we should expand this feature to show timelapses of religion or striped provinces controlled by another country.

For those curious about the watermark, it is to save content creators needing to answer the "how did you make this" question a million times. Or is that all a ruse and the truth is the watermark is a new monetization strategy? Don't worry, it's not, the watermark has been designed to be easy to remove for anyone skilled with video editing software.

Save files contain province history that informs when a province changes hands. The example below has the province of Genoa (101) becoming owned by Naples on 1495-12-09.

The basic process to creating the timelapse is to calculate at a given year:

Did you know when a colony is destroyed or a native tribe migrates that there is a history entry for it that sets the new owner to "---":

Despite not being a tag, it has its own country color, which is greyish:

So being owned by "---" is equivalent to being unowned.

As an aside, there's entries in the province history for every subsequent tag switch, using the fake_owner key, but we ignore those as we already know how to follow save tag switching logic. I suspect fake_owner was added to make the timelapse feature easier to implement natively in EU4.

It's a shame that the fake_owner seems to only bloat the file, as it makes world conquest saves that tag switch more than a dozen times quite convoluted.

Back on topic, now that we know each province's color we go through the long process simulating the EU4 map in the browser with WebGL. This'll get us a static image of the map.

We rinse and repeat the process by incrementing to a new date, recalculating province colors, and redrawing the map. By chaining all the images together, we'll have ourselves a timelapse.

An in-app timelapse is good, but half the fun is being able to easily share timelapses.

The first step to sharing a timelapse is recording it. Did you know that browsers have a Media Recording API? It's mostly associated with the WebRTC API, but we'll be using it with just our timelapse canvas.

I foolishly believed that the solution would be simple. After all, isn't it just calling captureStream on our canvas and piping it to a MediaRecorder?

Turns out it is surprisingly difficult:

After a bit more than a week all problems, have been solved or at least solved to an extent that is tolerable. If you're interested in a more thorough and technical explanation of everything, take a look at the pull request that added the feature.