Welcome to the launch of Rakaly! Rakaly is an unofficial EU4 achievement leaderboard that houses an in browser savegame analyzer. Since this is an initial launch, things are pretty limited. Many achievements aren't implemented, but I didn't want to delay any longer in order to receive community feedback.

Join the discussion over on Discord

Below is a screenshot of Rakaly 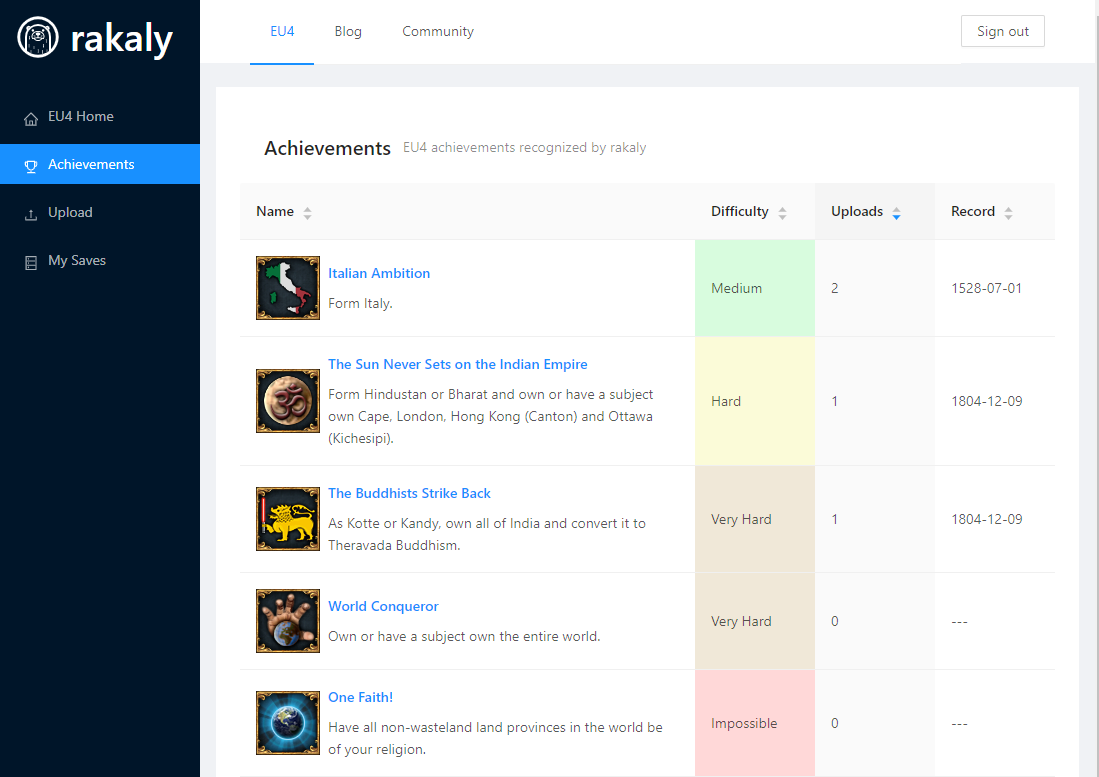 A view of available achievements

Create a leaderboard that is accessible to casual EU4 players. There are around 300 achievements in EU4 and even if only half make sense to construct a top 10 leaderboard for that still leaves 1,500 positions to fill. Hopefully this encourages EU4 players to continue to play EU4 how they want to and not feel pressured into tactics they consider too gamey or nation ruin to shave a few days off their time. Undoubtedly there will be hotly contested achievements where every day will matter, but there should be plenty of room for all.

To keep the leaderboard approachable, recent patches will be weighted more favorably. The thought behind this is threefold. It encourages players to reattempt older achievements using new mechanics, allows for newer players to dethrone old records, and naturally causes runs that could be considered a bit too exploity to lose their spot over time. I still want to preserve truly exceptional playthroughs, so I don't have an exact calculation set in stone (hint: community feedback). The main goal is to keep the leaderboard fresh and approachable. As writing this, 1.29 saves have a 10% tax.

On the topic of exploits -- they are allowed. Some achievements are difficult to complete without some sort of gamey tactics. This is something that we can keep an eye on. But as a rough guideline, if you see it on a Florry stream, or on a video by another EU4 content creator (eg: Chewyshoot, Radio Res, Arumba, Zlewikk, etc), you're fine. Spiffing Brit maybe not so much. We'll see.

Rakaly isn't just going to be leaderboard focussed. In fact a leaderboard wasn't the reason why Rakaly was developed, as a significant number of players don't run an achievement compatible game (eg: mods, multiplayer, easy difficulty, etc) and I want Rakaly to be able to cater to everyone in the community. So keep in touch, if Rakaly doesn't serve your interests today, it may in the future (also feel free to chat with me about what your dreams are for Rakaly).

This may be something that may only excite me, but I am looking forward to reaching the potential for the in browser analysis. All saves are open to this, ironman, normal, and multiplayer games. One does not need to sign up for an account at Rakaly to analyze their save. The goal is that while the leaderboard is ironman focussed, the analysis is for everyone (mods can work, but unmodded provides the best experience).

On a technical level, lots of fancy things happen behind the scenes to be able to crunch through a savefile. It's deserving of a dedicated blog post. The desire is to be able to expose everything in a save however the user wants.

To give a sample, below is an income ledger throughout time where one can toggle which countries are displayed (click to expand).

This is the very tip of the iceberg even for just this chart. Imagine charting current rivals, past rivals, past greats, or any custom selection where you can slice and dice time ranges and plotted countries.

Imagine charts of casualties across time.

Imagine a graphical breakdown of military strength across countries.

Yes, your imagination has to be used for a lot of things, but the great thing is that uploaded saves will benefit from new features as they are released. So even if things look a little bare now, over time it will fill out.

One of the goals of analysis is for everyone to glean insights into record settings playthroughs. Does the record holder have some sort of skill we all lack, or are they just incredibly lucky. Are there idea groups well suited for achievements or is it better to sink your monarch power into other areas.

Another site popular with EU4 players, especially among the multiplayer community, is Skanderbeg. Great site, everyone should use it. Skanderbeg does some amazing map projections and aggregates a ton of data.

When I first mentioned creating a leaderboard, a number of people were skeptical that the effort would be worthwhile as EU4 is available on speedrun.com. Speedrun is a great site, but I find it is too generic and constrained. Speedrun requires video evidence, and that is too difficult of a hurdle for most. In addition, there are lots of rules to follow in order to submit a run. It's discouraging, but it's what the team behind the EU4 speedrun have to work with given the speedrun framework.

Rakaly is much more interested in allowing players to play as they like with as few restrictions as possible. Play the game at 2 speed over the course of a month, for all Rakaly cares. No video proof necessary, just the savefile. This is what differentiates Rakaly and makes it worthwhile, as it is targeted towards the casual EU4 player.

This is the bare minimum in order to launch Rakaly. There are tons of features in the works, but I needed to get something out the door for community feedback.

There will be bugs -- those will be ironed out in time. Keeping the initial release minimal will allow Rakaly to work through growing pains that are inevitable when a site goes public.

Here's what the future may hold -- nothing is set in stone:

Or do all of these inquiries take a backseat to more achievements and visualizations!

I ask readers to keep in mind that Rakaly isn't free to run, especially with the features that are in the pipeline. I haven't fleshed out a plan to make Rakaly sustainable. I do know that Rakaly will always provide the in browser analysis engine to users without requiring an account, and will always let users with an account upload a record breaking save. I have enough resources to sustain Rakaly for quite some time, but I want to make the community aware that I'm open to sustainability ideas.

Rakaly is derived from the following:

Since the rakali are known as Australia's otter, Rakaly's logo is an otter.