First I want to mention I put a bugfix in place for the racing building charts that omitted destroyed buildings. Previously only buildings standing at the date of the save would be considered. This was fine at first, but failed to take into account how a player would destroy coastal batteries and fortifications as they consolidated their country (this may not be as true for multiplayer saves where forts are more necessary).

I don't think I mentioned in the previous post, but the racing building chart should be future-proof mod friendly! Nowhere in the code does it contain logic for dealing with specific buildings (other than the localization, which is nonessential). This is what made deriving a province building history so tricky as a province only records current buildings like so:

So the fix was to either hard code the buildings -- or (what I ended up coding): when calculating a province's building history, all provinces are scanned to know what buildings are available so that we can identify what history events relate to buildings.

It's been my goal since day 1 for there to be a desktop component to Rakaly that uploads saves while you play. It would work by watching for save files and uploading them to the server when a new one appears. There are two underlying reasons why I want a desktop component:

So I've been playing around with desktop GUIs and have started piecing one together: 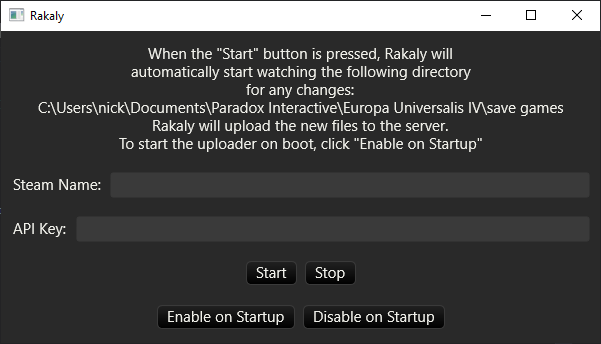 The Rakaly Desktop prototype I've been playing with

To be clear Rakaly Desktop is still a far off dream and this is only the very lowest foundations, but I have some goals that I've made progress on:

This may sound confusing as Rakaly only accepts achievement record breaking saves at the moment. I've mentioned this before, but there is no technical reason for this limitation, so I plan to lift this limit at some point in the future, but I want to do this with plenty of forethought:

Anyways, this has been the first (public) musing about Rakaly desktop. If you have any suggestions, use cases, or concerns feel free to drop by the discord or email myself.